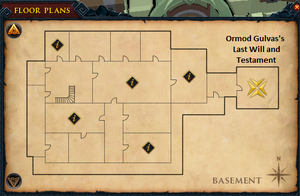 Ormod Gulvas's Last Will and Testament was added as mentioned in the patch notes of 19 October 2015, almost a year after the release of the Broken Home quest. The text can be found in the most eastern room in the basement of the Gulvas Mansion on the floor near the sarcophagi of Ormod Gulvas and his wife.

The following text is transcluded from Transcript:Ormod Gulvas's Last Will and Testament.

My work here is done.

The servants have been discharged. No more shall this life trouble them.

I have taken poison, and now I retire to my tomb to rest beside my wife.

The voices call me murderer, but I know that history will remember me as an entrepreneur and visionary.

My father was a[sic] merely a crude tribesman, but it was through imagination and hard work that I made my fortune through the forging of civilisation itself.

Many were the warlords who wished to control Misthalin, and runestones were the key. I established the supply and trade of these precious rocks, and grew wealthy from it.

My work was important, and it kept me busy. I loved my wife, but I had not the time for our son or his foolish distractions. When the pox took her, Saradomin did not care to double the hours in my day. My work was what kept this great house over our heads, but a stupid boy of two winters cannot understand such things.

I took on a nursemaid to care for him, and simply required that she keep him constrained to the nursery tower. His needs were satisfied. He had food and books.

When the nursemaid committed a grave error by damaging one of my relics, I disciplined her as any good master ought to discipline a servant. Perhaps I did lose control of myself, but history will agree that the blame for her death lies with her. Had she been less clumsy, it need not have happened.

It was many weeks before I remembered my boy in the tower. By the time he was quite dead. That fatuous nursemaid had failed to provide him with an adequate source of water. Another death to lay at her feet. May Saradomin have mercy on her black soul!

It was some time after this that I found myself becoming inexplicably prone to unsettled moods. I sought a solution from the Orders of the Wizard's Tower with whom I did business. I made it clear to them that some sort of curse or other magical malady was to blame, and they laboured to create a spell to remove it.

They failed. Their excuse was that they did not have an explicit understanding of what had befallen me, but I named them as the faithless traitors that they were and sent them away.

I sought insight instead from tribal seers and soothsayers. It was a toothless, sightless old man that told me that my freedom lay buried deep beneath this very house, although he could not tell me what it was or how it would help.

With no other recourse I dug deeper and deeper beneath the house. I had seen fragments of ruined stonework to the south, and it was possible that something lay buried down there. I was proved correct when my crew opened a deep cave, and in that cave a great door, magically sealed.

The door resisted every effort to open it. No man or tool or spell at my disposal worked. I attempted to contact the Wizard's Tower but they compounded their earlier mistake by refusing to even speak with me. Whatever lay beyond that door would remain there. I sealed the basement away with great locks and put it from my mind. Clearly the soothsayer had been wrong.

I thought on the matter for some time and eventually realised the answer to my predicament. My malaise was an inevitable result of my knowledge and experience of life itself. In retrospect it seems obvious to me that a life which would take away a hard working man's wife and child is not a life worth living.

This realisation made, I know what had to be done. Before I could rest, I would pass on the fruit of my discovery to the servants so that they need not suffer as I had suffered. To make their final hours more entertaining I sealed the mansion with magic and hunted them one by one.

To my sister Briaca I leave the mansion and all of its contents. May it shelter you better than it has me.
Retrieved from "https://runescape.fandom.com/wiki/Ormod_Gulvas%27s_Last_Will_and_Testament?oldid=25382031"
Community content is available under CC-BY-SA unless otherwise noted.