The Ourania Cave is a dungeon that houses the Ourania Runecrafting Altar, which is the dungeon's main point of interest. 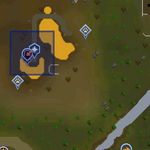 The cave is found north of the Scorpius Shrine, and is currently controlled by the Zamorak Magical Institute (or ZMI). The ZMI has invaded the cave and taken over the short route to the altar, which they aggressively guard against all others. The dungeon also has a mobile banker, Eniola, to whom you must pay 20 runes of any type to use.

The Ourania runecrafting altar found in this cave has the power to turn Pure essence into any type of runes (except combination runes), even the Soul rune. Each rune crafted grants the crafter twice the normal amount of experience that would have been gained by using any other Runecrafting altar. As a result, this dungeon is a popular place for runecrafters to gain experience.

There are actually two altars in the Ourania area, and the runecrafting altar goes by several names, which can cause some confusion:

There are two routes to the altar:

The ZMI altar runecrafting world is world 70. Runecrafting at the Ourania altar on this world will reduce the runecrafter's chance of getting damaged while using the shorter path as the number of runecrafters on this world outnumber the number of guarding monsters. However, it is still wise to switch on the appropriate protection prayers. Bringing summoning familiars such as the Spirit terrorbird or the Abyssal parasite can also provide an advantage when runecrafting here.

Equip weight-reducing clothing (Boots of lightness, Spotted cape, etc.) and a staff that gives you infinite Earth runes. Go to Lunar Isle and activate Lunar Spells. Withdraw as much essence as you can and use the Ourania Teleport spell to teleport to the Red Salamander hunting grounds. Run north-west and then south until you reach the chaos altar. Recharge your prayer if you need to and go down the nearby ladder. Switch on Protect from Range and any prayers that raise your defence or magic defence (Mystic Might, Chivalry, Piety, etc.). Take the shorter path and run to the Ourania altar. When you are done runecrafting, use either Tele-group Moonclan or Moonclan Teleport to return to Lunar Isle, where you have access to a nearby bank. If you do not have the runes for these teleports, Home Teleport or ask for someone to teleport you to Lunar Isle with Tele-group Moonclan (make sure you have accept aid on). Once you have banked your runes, eaten food if needed, and withdrawn more pure essence, use the Ourania Teleport spell and repeat the process.

Equip your weight-reducing equipment (Boots of lightness, Spotted cape, etc.) and teleport/walk to the Tree Gnome Village. There, use the Spirit Tree to teleport to Mobilising Armies, where you will run to the bank at M.A. There, get your pure essence and use the spirit tree to teleport back to the Village, and "Follow Elkoy" outside, there run to the cave entrance and take one of the paths, and craft your runes. If you have enough you can use the banker, but if not go out and run and "Follow Elkoy" again and repeat the process.

A variant on this strategy employs banking at Mobilising Armies as above but then using the spirit tree to teleport to the spirit tree at the Khazard Battlefield and run due west. Using a Ring of Duelling allows you to teleport back to M.A., bank and start over.

Another way is to instead of teleporting to M.A. teleport to the Grand Exchange, providing the bank closer than M.A. This method is useful if players run out of essence, players can teleport and buy pure essence right away.

Retrieved from "https://runescape.fandom.com/wiki/Ourania_Cave?oldid=25381184"
Community content is available under CC-BY-SA unless otherwise noted.