The official world for Ourania Runecrafting Altar is world 36 (P2P). 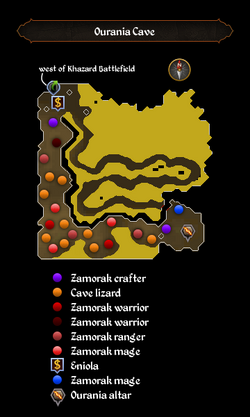 The Ourania Runecrafting Altar (also known as the ZMI Altar) is a special Runecrafting altar located in the Ourania Cave, which is west of the Battlefield, and south of West Ardougne.

It converts pure essence into an assortment of random runes without a chance of bonus runes being created. The altar, which requires no talisman, tiara or staff to enter, gives double the normal experience for every rune crafted. However, the Abyss has since been given a 250% runecrafting experience modifier, increased to 350% with a demonic skull. Players do not need a specific Runecrafting level in order to craft at this altar, but the chance of crafting higher-levelled runes increases with a higher Runecrafting level.

Once inside the Ourania Cave, quickly reached by an Ourania Teleport, players may use a bank there that requires a payment of 20 runes of any type. They can then go to the altar by taking either a short and dangerous route or a longer and safe route. The long route has no monsters and has a crack at the end that requires no Agility level to use.

The player is able to craft all runes that are available in the game (except Armadyl runes and Combination runes), despite not having the required level or quest requirements. However, the higher the player's Runecrafting level, the higher-levelled the crafted runes will be. The experience here is double to what you would normally get for the runes.

The Ardougne cloak 2 (and higher) adds a chance of creating more runes in the Ourania Altar (rune output is increased by roughly 15%), though no extra experience is gained. Master runecrafter robes (the full set gives 5% more experience) will work here. However, they have a maximum boost of 700 experience per altar click or batch. Runecrafting gloves from Fist of Guthix will not work here, as the experience is already doubled.

There are two paths leading to the altar: a shorter, dangerous route, and a longer, safe route.

This route is a long winding pathway. Once players reach the end of the path, they will have to squeeze through a small crack in the wall to reach the altar. The wall-crack shortcut has no Agility requirements.

The key is to stay light and protect against the warriors, mages, and rangers, who are aggressive and fight with all three styles, it is recommended to wear armour that boosts Defence against Magic, and activate Protect from Missiles (there is an altar just outside the cave). However, after the Evolution of Combat, the ZMI members do not do much damage; the run through them should not take more than 20 seconds, and even with 1 Defence and no armour, you should not take more than 1,500 damage total in one run (therefore possibly feasible even to level 3 skill pures if they bring several pieces of cheap food like trout). Remember to turn Auto Retaliate off, and set Right Click or Hidden in attack options of Combat Settings.

Here is a list of a recommended setup with downgradeable options:

Eniola will allow you access to your bank account in exchange for 20 of any one type of rune. Using cheap runes such as mind runes at 18 coins each is recommended. Due to an update, you no longer need to close the bank window to fill Runecrafting pouches with pure essence. Previously it is common to deliberately keep a full bank, so you can bank the various runes crafted without banking the pouches, but this is now unnecessary due to bank presets.

There are a few other methods of banking when Runecrafting at the Ourania Altar:

Retrieved from "https://runescape.fandom.com/wiki/Ourania_Runecrafting_Altar?oldid=25381086"
Community content is available under CC-BY-SA unless otherwise noted.