Start a Wiki
CS
This article is about the removed certer. For the Signature Hero, see Sir Owen.

He runs a fish exchange store 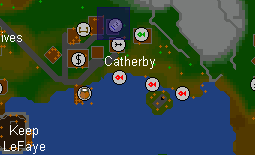 Owen was a certer in RuneScape Classic. Players would take their items to a certer to get them noted, as it was not possible to note items in banks in Runescape Classic. He would cert Raw bass, Bass, Raw sharks, and Sharks. Padik had the same features but was located at the Fishing Guild. Many players have inquired that Owen's gender be changed to female, because at the time of release, there were few female non-player characters around.[source needed] He was removed with the release of Runescape 2 along with Sidney Smith.

Retrieved from "https://runescape.fandom.com/wiki/Owen_(RuneScape_Classic)?oldid=25380348"
Community content is available under CC-BY-SA unless otherwise noted.