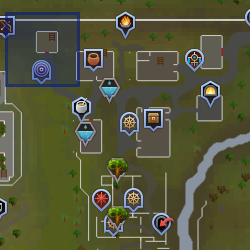 Oziach is a middle-aged salesman with ties to the Champions' Guild. He lives just north-west of Edgeville and, during Dragon Slayer, informs applicants to the Guild where the three map parts to Crandor can be found. Afterwards, he offers successful applicants access to his Oziach's Armour, where he stocks the rune platebody, blue dragonhide body, and mystic robe top. He is also a good friend of Evil Dave, whom he calls Little David. He appears as a witness in the EVIL DAVE v. The People court case.

He can attach draconic visages to anti-dragon shields to create the dragonfire shield, charging 1,250,000 coins per shield.

Retrieved from "https://runescape.fandom.com/wiki/Oziach?oldid=24927683"
Community content is available under CC-BY-SA unless otherwise noted.