The Panda outfit was an outfit available to purchase at Solomon's General Store. It cost 240 RuneCoins for free users and 216 RuneCoins for members. As of 3 September 2013, it was made available to buy for 46,080 loyalty points. Like all other cosmetic items from Solomon's General Store, the outfit is not visible while in PvP areas. The set consists of: 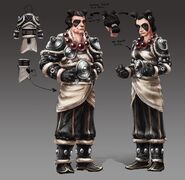 Retrieved from "https://runescape.fandom.com/wiki/Panda_outfit?oldid=24926236"
Community content is available under CC-BY-SA unless otherwise noted.