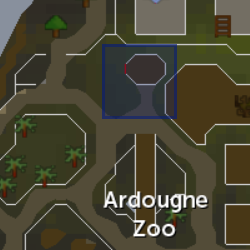 Parroty Pete is an employee at Ardougne Zoo who cares for the parrots, plays a small role in Eadgar's Ruse and is often seen chatting to Postie Pete, his brother. Postie reveals that Parroty's pay is quite low.

Retrieved from "https://runescape.fandom.com/wiki/Parroty_Pete?oldid=24925079"
Community content is available under CC-BY-SA unless otherwise noted.