The Party Demon was a special demon released for the RuneScape 200 million accounts celebration. According to Hey Presto, it is attracted by "The music of merriment, the fizz-bang of fireworks and the heady hullabaloo of a sumptuous shindig."

The Party Demon has 200,000,000 hit points or health as Hey Presto says, rather than life points, but cannot damage players. On the other hand, the Boogie bow is the only weapon that can damage him; attempt to use any other weapon to fight the demon prompts the player with Your attacks don't seem to affect the demon. Try asking Hey Presto... To get the Boogie bow you have to speak with Hey Presto. Alternatively you can simply right click on him and select the 'Get weapon' option.

Players usually hit between 10,000 and 30,000 damage, but they would occasionally get a golden hit which would be a multiple of 50,000. The maximum hit that the player can do to the Party Demon is 1,000,000. No experience is gained from attacking him. Once you have defeated him you can talk to Hey Presto to claim your 200m glasses.

The Party Demon will say one of the following phrases every time he performs his attack.

The message that appeared when logging in 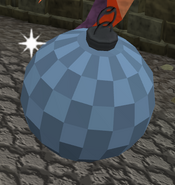 Retrieved from "https://runescape.fandom.com/wiki/Party_Demon?oldid=24924610"
Community content is available under CC-BY-SA unless otherwise noted.