She has a certain twinkle in her eye.
Please add a map!

She looks her normal, perky self. 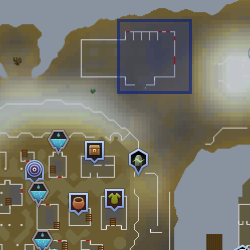 She looks tired and needs some encouragement.

Unlocking her would be as difficult as unlocking Borrowed Power.
Please add a map!

Pauline Polaris is a member of the Moon Clan on the Lunar Isle. During the quest Lunar Diplomacy, Pauline will ask the player to guess her real name to receive the lunar cape.

Pauline is originally located in a house in the north-west corner of the village on Lunar Isle. However, after the completion of quest Lunar Diplomacy she moves permanently to the entrance of the livid farm.

Pauline Polaris is her alias, she tells the player, and her birth name is Jane Blud-Hagic-Maid. She changed it because she did not like it and because people were mean to her about it. The hint she gives players who must guess her birth name is as follows:

"'Change a letter from the word Dane to get my first name.
The first part of my surname rhymes with wood
The third part rhymes with spade
And the second rhymes with magic."

Pauline also runs the Livid Farm, which can only be accessed by completing Lunar Diplomacy and having the skill requirements to use. Every once in a while she will feel drained (she will be called Drained Pauline Polaris when this happens). If the player casts Energy Transfer on her, and then selects the correct encouragement, she will become normal again. A seal of passage is not needed to speak with her at the Livid Farm.

If you have obtained the Witchdoctor camouflage gear from Papa Mambo at Herblore Habitat, she will talk about Papa Mambo and will give you mambo's potion. Drinking the potion gives 3,000 Farming experience.

Concept art of Pauline
Click an image to enlarge

Retrieved from "https://runescape.fandom.com/wiki/Pauline_Polaris?oldid=24923542"
Community content is available under CC-BY-SA unless otherwise noted.