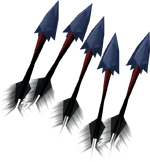 Enchanted pearl bakriminel bolts have a 5% chance of triggering the Sea Curse effect, which deals 15% more damage to enemies weak to water, but 15% less on enemies weak to fire. In PvP, the bolts will turns off the target's run, forcing them to walk.

Onslaught can trigger the effect, increasing that hit by 15%. The recoil damage is unaffected by the activation.

Sacrifice can trigger the effect and will heal accordingly to the increased damage.

Retrieved from "https://runescape.fandom.com/wiki/Pearl_bakriminel_bolts_(e)?oldid=24923166"
Community content is available under CC-BY-SA unless otherwise noted.