• An inhabitant of icy regions.
• A Gentoo penguin.
• It's all black and white to them. 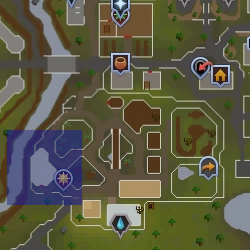 The Penguin (Codenamed Pop) found in the penguin pen of the Ardougne Zoo is actually a KGP spy that has been stationed there for well over a year to collect intelligence. His wish is to return to Palingrad. He can be distinguished from the other penguins because he stands still and is the only penguin with a "Talk" option. During Cold War the player must visit him and collect a mission report and deliver it back to the KGP headquarters on the iceberg. Before doing this they must get into the clockwork suit and perform a sequence of penguin emotes, which varies between players and is dependent on the emotes observed on the iceberg. After the quest he will not talk to the player because "it's not safe".

Other penguins can be found at the Iceberg during Cold War, but these cannot be interacted with.