The Penguin agility course is located on the Iceberg, and requires an Agility level of 30. Players also need partial completion of the quest Cold War, and must be wearing the clockwork suit.

This course offers slightly higher experience than the Barbarian Agility Course, but requires a lower Agility level. However, all four obstacles can be failed, so food and agility potions are recommended if the Agility level is low. Players are also recommended to bring Boots of lightness to decrease their weight as well as to run longer. 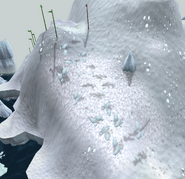 Retrieved from "https://runescape.fandom.com/wiki/Penguin_Agility_Course?oldid=24921334"
Community content is available under CC-BY-SA unless otherwise noted.