Start a Wiki
OS
This article is about the ruler of Menaphos. For other uses, see Pharaoh (disambiguation).
Loading...
Normal'Phite club

He exudes an aura of wisdom far beyond his years might suggest.

The Pharaoh is the current ruler of Menaphos. He is considered by non-Menaphites to be greedy and cruel.[1][2] He appears to hold little regard for religion, employing men willing to open fire on religious leaders.[3] He rules through fear and employs a vast spy network to suppress dissent.[4]

The Pharaoh was the son of an unnamed female Pharaoh who Osman regarded as a militant and petty ruler. It is unknown what happened to the Pharaoh's mother, but he assumed the throne after her reign. In his early years as Pharaoh, he was a kind and just ruler, righting all the sins of his mother. Sometime near the end of the Fifth Age, he suddenly changed and became like his mother.

At an unknown time, a group of Amascut devotees attempted to overthrow the Pharaoh, but failed. They were subsequently exiled from Menaphos and retreated to Pollnivneach to regroup for another attempt.[5]

During the Fifth Age, Menaphos was at war with Al Kharid but the Pharaoh, then a worshipper of Apmeken, declared a fragile peace with Emir Shah.[6] Amascut, furious at the cessation of of hostilities, dealt with the Pharaoh.[7]

When the Emir fell ill and his son Ali Mirza went missing in 169, Jabari, a Menaphite ambassador and thrall of the Devourer sent to Al Kharid demanded stability, even if that meant putting a Menaphite on the throne, even temporarily. The offer was rejected, with Al Kharid's spymaster Osman suggesting the Pharaoh was involved in the kidnapping of the Prince.[8] The Emir believed that Menaphos would declare war should he die without Ali to take up the throne, though the prince was later recovered.

When the neighbouring city of Sophanem became infested by plagues, the Pharaoh ordered the gates between the cities sealed, quarantining the city and restricting the movement of Sophanites. Attempts to establish contact between the cities have been violently repelled by Coenus, the vicious Captain of the Menaphite Guard. Upon hearing the slaves of Sophanem had been temporarily relieved of their duty following the quarantine, the Menaphite slaves rose in rebellion, although Coenus and his men managed to harshly subdue the revolt in the imperial and merchant districts.

Sometime ago, during a riot , the Menaphite guards captured Batal. To ensure no more workers would riot, the Pharaoh had Batal's hands cut off to make him an example of what would happen if he was defied again.

According to rumours, the Pharaoh is not planning on opening the city gates soon - the opposite, if anything.[9]

During The Jack of Spades quest, the Pharaoh reluctantly allows the player and Grand Vizier Hassan into the city, telling Jabari that he is taking a big risk inviting outsiders into Menaphos. He has his men watch the two to ensure they do not cause any trouble while they stay in the city.

During Crocodile Tears, the Pharaoh learns that Crondis has broken free of Amascut's hold, and decides to take Jabari's advice of paying the local bandits and thugs to terrorise the city.

During Our Man in the North, Jabari informs him that the player he invited is meddling in imperial affairs, which he disregards. Near the end of the quest, the Pharaoh reveals his goals and tries to find Jabari, but fails.

In 'Phite Club, the Pharaoh fights the player but is defeated. It is shown that he was corrupted by Amascut and begs for mercy. Regardless of the player's decision, Osman appears and kills him. 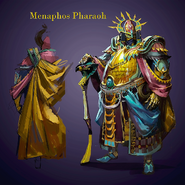 Concept art of the Menaphite Pharaoh

Wallpaper of the Pharaoh
Click an image to enlarge

Retrieved from "https://runescape.fandom.com/wiki/Pharaoh?oldid=24564468"
Community content is available under CC-BY-SA unless otherwise noted.