Lovely girl, shame about the smell. 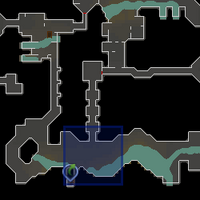 Phingspet Grime is an elderly and somewhat crazed woman found in Varrock Sewers, with her sister, Grimesquit. Phingspet and her sister help the player to train their cat by catching eight rats during the Ratcatchers quest. After this is accomplished, they will redirect the player to Jimmy Dazzler.

During the first interactions with the player, she speaks in a unique "language", a mixture of British English and gibberish. However, towards the end of the quest, this is revealed to be a ruse pulled off by the two sisters as a joke.

The Varrock Census shows us that the Grime Sisters' professions are "withheld". This might mean that Phingspet had a "top secret" job in 160's, she was nowhere to be found when the census was written, or she simply didn't have one worth reporting.

Retrieved from "https://runescape.fandom.com/wiki/Phingspet?oldid=24562221"
Community content is available under CC-BY-SA unless otherwise noted.