The Phoenix Gang, also known as the VTAM Corporation, is a thief group in Varrock. They are one of the two gangs that a player can join in the Shield of Arrav quest. It is led by Straven Enroy.

The gang is constantly at war with the Black Arm Gang, a split-off group from their own.

The Phoenix Gang has a hideout in the basement of a ruin in southern Varrock, and a weapons storage room on the first floor of a small building in the south-east sector of the town.

The weapons storage room can only be entered by Phoenix Gang members during the Shield of Arrav quest. Prior to its removal on 13 February 2017, the weapon store key was needed to open the door leading to the storage room. Inside the storage room are Phoenix crossbows as well as some daggers, boots, and gloves.

The Phoenix Gang Hideout can only be entered by players that are members of the Phoenix Gang, and contains several rooms with thieves and chests. You cannot be a part of both gangs. 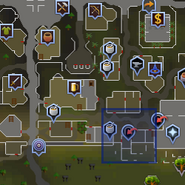 The underground lair of the Phoenix Gang.

The building in which the V.T.A.M. corporation claims to operate.

The weapon storage area of the Phoenix Gang, close to their headquarters.

The Phoenix Gang Plaque.
Click an image to enlarge

Retrieved from "https://runescape.fandom.com/wiki/Phoenix_Gang?oldid=23358826"
Community content is available under CC-BY-SA unless otherwise noted.