OS
This article is about the Herblore item. For the Summoning-related item, see Phoenix quill.

Yes
The Golem
No

Phoenix feathers can be grabbed from the desert phoenix along the north-western bank of the River Elid, in the gorge north of the bridge. One feather at a time can be plucked from the bird's tail, but the player may fail, in which case the phoenix stuns the player and does 200 - 300 life points of damage, depending on how many life points the player has left. Players do not kill the bird when plucking feathers. When a feather is successfully plucked, the player earns 26 Thieving experience points.

A phoenix feather is used in The Golem quest, where it is used on black mushroom ink to turn it into a phoenix quill pen. 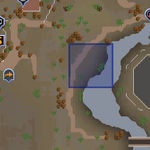 The desert phoenix may be found along the west bank of the River Elid in the Kharidian Desert, north of the bridge to the Dominion Tower in the north-eastern part of the desert. The shaded blue area in the centre of this map indicates the walking area of the desert phoenix.

To collect more than one phoenix feather you must complete The Golem quest. If you don't, you'll have to drop the feather every time you pick one, before you can pick another. Also if you have a feather in your bank, you can't pick another one. If you did The Golem quest, you can keep picking feathers and banking without having to drop them. Phoenix feathers can now be stored in Beast of Burden familiars.

If making super antifires, you can also bring normal antifires and combine them with the feather to keep collecting them.

The best method for collecting feathers is to wear any variant of the Thieving cape as all feathers will be noted. Alternatively, one may bring multiple Sign of the Porter so that the number of banking trips is minimised. You may also use magic notepaper although this comes at a higher cost of 1,379 per feather noted.

There are several ways to get to the phoenix. From quickest to slowest (approximately), they are:

Using the magic carpet requires a 1000 coin payment (reduced if the player has done part of the Rogue Trader minigame and/or is wearing a ring of charos).

For collecting large amounts of feathers, some form of fast banking is recommended. The bank chests in the Dominion Tower are the quickest banking method, but they require the ability to enter the tower. Players without access must use other methods, listed below. When using one of these methods, after banking return to the phoenix by your preferred route. From quickest to slowest (approximately), the fast banking methods are:

Tip: Plucking the feathers can be combined with actions that have a waiting time, like gathering papayas with Fruitfall from a fruit bat. This is a way to earn money while gathering feathers.