Start a Wiki
RSCOS
This article is about the Sinclair family dog handler. For Rolo the Stout's subordinate, see Foppish Pierre. 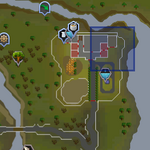 Pierre is the dog handler for Lord Sinclair at Sinclair Mansion. When Lord Sinclair was murdered, he suspected Carol as he had seen her arguing with her father over some missing books.[1]

When Anna was arrested and tried for the murder, he claimed that all the Sinclair children bought enough to kill their father, and couldn't provide any evidence that she had definitely committed the crime.

Retrieved from "https://runescape.fandom.com/wiki/Pierre?oldid=24563127"
Community content is available under CC-BY-SA unless otherwise noted.