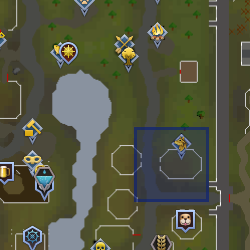 Pikkupstix is the central character in the Summoning skill. The player may begin the Wolf Whistle quest by speaking to him. He runs the shop Pikkupstix's Summoning Shop alongside the Summoning skill tutor Magestix selling essential items such as spirit shards and pouches. He also sells the Cape of Achievement - Summoning, for 99,000 coins, provided that the player has 99 Summoning. According to Bowloftrix, he is a walking disaster magnet, although he is never the target and his assistants suffer under whatever catastrophe he attracts.

Additionally, Pikkupstix may tell players where to find his assistant Pikkenmix for the Familiarisation Distraction and Diversion.

He appears in the Fremennik saga Three's Company. He is kidnapped by Carn during an attack on Taverley, and is rescued by the Signature Heroes Arianne, Ozan and Sir Owen.

In one "busy week", Pikkupstix lost the following assistants:

He runs Pikkupstix's Summoning Shop, alongside the Summoning skill tutor Magestix, selling essential items related to summoning, such as spirit shards and pouches.

Retrieved from "https://runescape.fandom.com/wiki/Pikkupstix?oldid=24563283"
Community content is available under CC-BY-SA unless otherwise noted.