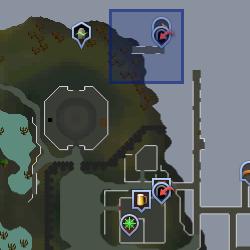 Pirate Pete is a pirate from Mos Le'Harmless currently in the service of Captain Braindeath. Before the events of Rum Deal, Braindeath sent Pete to find help in fighting the invasion of Captain Donnie. Players must talk to him to start the quest, and he is located on a dock near the Ectofuntus. He also offers the player transport to Braindeath Island after the quest. He is the only person who knows how to reach Braindeath Island, and will distract and knock out anyone wishing to go there to ensure the island's location remains secret. When travelling back and forth, players are knocked unconscious every time, which does not deal any damage. Players will then wake up on the island, which does not appear on the RuneScape map.

Pirate Pete is the piratical representative on the Secret Council of RuneScape. He is present when the Culinaromancer is freed during Recipe for Disaster and is frozen. In order to save him, he must be fed his favourite food, a fishcake.

From time to time, Postie Pete visits Pirate Pete. Players can have a piratey conversation with Postie.

Retrieved from "https://runescape.fandom.com/wiki/Pirate_Pete?oldid=22831896"
Community content is available under CC-BY-SA unless otherwise noted.