View source
watch 02:53
GTA: The Criminal Enterprises - The Loop
Do you like this video?
Play Sound
OS
This article is about the village. For other uses, see Piscatoris (disambiguation). 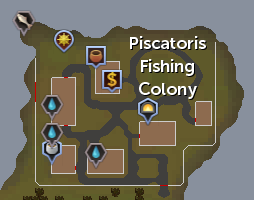 The Piscatoris Fishing Colony is on the north-western corner of Kandarin. It is accessible once a player has completed the Swan Song quest (You need 101 quest points to start this). The colony once thrived on the monkfish industry but has recently come under attack from sea trolls, which has decreased the monkfish supply. Players get a chance to help the town during the Swan Song quest. After completing the quest, players may fish for monkfish at any of the five fishing spots along the colony's northern coast. The colony has become a popular spot to fish for higher level players capable of doing the quest due to the speed and high experience associated with monkfish and the fishing spots' proximity to the bank, as well as being a reasonably profitable endeavour. Tuna and Swordfish can also be harpooned at the colony, although it is used almost exclusively for fishing monkfish, as there are better places for catching the other fish.

Although the town is relatively remote in comparison to other settlements, there are several ways to reach it.

The colony is occasionally used as a base by players using the other attractions of the Piscatoris region. Players who have completed Swan Song sometimes find the bank here useful to withdraw and deposit items. Players can find the following south of the colony: The Piscatoris Hunter area, one of the few hunting zones of RuneScape, a Summoning Obelisk, which is located in a cave, and a nearby mine, which is notable for its three iron rocks right next to each other. This makes it an excellent spot for power mining. The Phoenix Lair, which features in the In Pyre Need quest and can be used once a day after the quest to fight the Phoenix for a considerable sum of slayer xp.