Plague's End is the ninth and final quest of the elf series. It is a grandmaster quest and requires completion of Within the Light, Making History and Catapult Construction, in addition to level 75 in ten skills. It has been released prior to Prifddinas, and one of its rewards include access to the city.[3] The Dark Lord, the Iorwerth Clan, King Lathas and the Plague of West Ardougne are plot points dealt with in the quest.[4]

When you speak to Arianwyn, he says that the dwarves have cleared the rock-slide in the Corridor of Light, so we can sneak inside and try to find out what Lord Iorwerth is up to. You'll need to get a set of mourner gear to disguise yourself as a Deathguard, or a Mourner.

Equip the mourner gear and speak to Arianwyn again, and he will teleport with you to the Corridor of Light. If you speak to the Dwarf here, he will give you a Report he found on a dead elf, written by Iestin, who hopes to see Prifddinas restored to its former glory.

Enter the door to the west to a storeroom, then the next door, where the Deathguard captain will demand to know what you were doing in the storeroom. Say that you thought you saw a mouse, and that it might have gotten into the food stores. Say that you didn't tell him because you knew he was busy. He tells you to relieve the guards in the room to the west, who are guarding the archaeologist Iestin Edern.

Speak to one of the guards, and they will leave. Speak to Iestin and he will ask one of you to take his report to the Mayor of Prifddinas. Arianwyn tells you that you should go while he remains on guard, and you also should try to find out more about Iorwerth's plan. Iestin's report says that he will be able to regrow Prifddinas soon, but he could be able to work faster if he knew the overall plan, particularly what power source Iorwerth intends to use.

Take the stairs to the north, where you will find Starving elves and Mourners. Go north into a building and speak to the Mayor. The Iorwerth master plan is on her desk, but she won't let you look at it. She asks you to check up on her lunch order, a shipment of gnomish foods from Arposandra.

Head south to the gnomecopter, talk to the mourner standing in front of 3 elves, tell him the mayor wants him to distribute the food between everyone. Then go back to the mayor and tell her the food is being distributed by the guards, she will leave and this will give you the ability to take the masterplan. Then head back to Iestin Edern and Arianwyn, give him the masterplan.

Go through all the chat options with him and Arianwyn will tell you to go to Bravek on the first floor of the civic office in West Ardougne, north of the church. And to Councillor Halgrive in East Ardougne.

The Councillor will raise an army but you need to get in control of West Ardougne first, and Bravek gives you a list of people to convince to start an uprising:

Talk to each of them and they will meet you in the West Ardougne church. You must remove your mourner gear (removing the mask will work) before you talk to them or they will be un-cooperative. When you've spoken to all of them, go there. In the church, talk to any one of the seven, go through all of the chat options, finally starting the strike!

When the mourners are defeated, Elena will give you a flag, and replace the flag on top of the mourners' HQ with it and Sir Hugo and Sir Edmond will arrive. Show them the proclamation from the Councillor and, after arguing about what to do next, they will go back to the castle. Get some food if you need to and go to the East Ardougne castle, talk to Sir Edmond near the entrance, get up to the throne room and kill Sir Hugo (level 107) guarding King Lathas Talk to the king and decide to let him live or die. Then go back to Iestin Edern with either Arianwyn's teleport or the hole near the east gate of Prifddinas.

Iestin Edern will tell you the regrowing the city is the only option to defeat them, and you need to find the Six Lost Elders. Go back to Lletya and talk to the scribe about the lost elders.

Gwir will tell you to get a book from the bookcase near her, read it, and then ask her again about the elders, go through all the elder options to get some items. Find them as following:

Return to Lletya and have Arianwyn take you back to the undercity of Prifddinas. Go through a dialogue and agree to go to the Tyras Camp to convince the commander to attack Lord Iorwerth's army so you'll be able to perform the ritual undisturbed. He will agree, so go back to Arianwyn.

Speak to one of the Elders, they will tell you to enter the library. Do so and you'll find the light puzzle. They are quite easy and have to be done 8 times, once for each Elder crystal. Between puzzles, you will also have to fight shadows and greater shadows. (you can safe spot the normal shadows behind the seals) From the third puzzle onward, you will also face the Dark Lord. It is advised to start placing/rotating mirrors from the central receiving crystal to find the correct way much easier. Once the path is complete, activate the crystal and the Dark Lord will attack (again). The fights range from only one shadow with the first crystal, to up to 4 greater shadows and the Dark Lord himself at the last one. 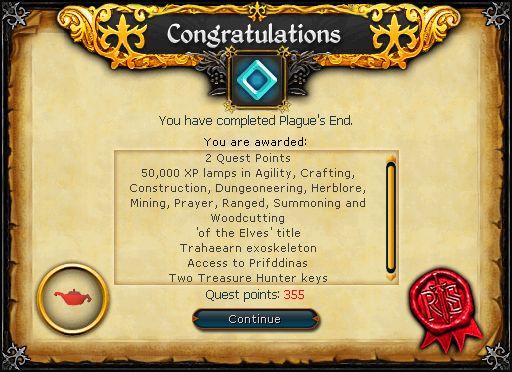 Note: If you lose any of the reward lamps for any reason, you will not be able to re-obtain them.

Plague's End was released approximately five years after the previous elf quest, Within the Light. It used to be the top contender for the 200th quest to be released, but the release of the first dragonstone Power to the Players poll in January 2014 changed this.[5][6] One of the quest design's aims was to create a very long quest.[7] Mod Osborne later stated that he imagined it to take at least as long as Ritual of the Mahjarrat.[8]

After the release of the poll on 13 January 2014 Mod Osborne's Q&A took place, giving more information about the quest. It was revealed that the quest would be released after the release of the first parts of Prifddinas with other story content explaining how the city had been restored from its seed form,[4] although this later changed to completion of the quest being required for the entirety of Prifddinas due to player feedback.[9] It was also confirmed that Seren would not be involved in the quest and would receive separate content at an unspecified later date. Prifddinas and the accompanying quest eventually won the poll, beating the Inventor skill by 14,661 votes.[10]

A month later, Mod John A announced that he had been appointed lead developer for the quest.[1] In a similar way to Birthright of the Dwarves, he would gather ideas and suggestions for the quest on the forums throughout February and March.[3] He also requested suggestions for rewards for the quest,[11] and a ruby Power to the Players poll released in early April established that a new reward would be made for the quest which would not be a crystal halberd, magic staff or thrown weapon.[12] During the quest's development, Mod John A confirmed that the quest would contain a light puzzle.[13]

Mod Osborne later revealed the quest's requirements in a podcast about Prifddinas.[7] A few weeks later, Making History was added as a requirement due to King Lathas' involvement therein.[14] In the official RuneScape video "Spend your Summer with RuneScape", released on 28 May 2014, the quest title "Plague's End" was first mentioned, after which Mod John A confirmed it to be the quest's title.[15] The quest had usually been referred to as "Mourning's Ends Part III" before, which was also one of the titles considered, along with Dark Lord of the Elves, The Gates of Prifddinas and The City and the Seed.[16] According to Mod John A, the title was chosen to reference the first quest in the series, Plague City, and to sound like a finale.[17]

The quest featured in the Behind the Scenes article for August that year, where it was called a "massive milestone for questers" and described as "a sprawling, two-hour+ Grandmaster quest that'll see you start a revolution, complete light puzzles, seek out the lost leaders of the fabled elf clans, and finally come face-to-face with the legendary Dark Lord himself."[18] Another Behind the Scenes video was released the following week, in which it was revealed that the quest would involve Lletya, the undercity of Prifddinas, its Grand Library, the death altar and the Underground Pass, amongst other things.[19]

Retrieved from "https://runescape.fandom.com/wiki/Plague%27s_End?oldid=11188392"
Community content is available under CC-BY-SA unless otherwise noted.