Whenever a ship returns from a voyage, there is a chance that the player will receive a random event, indicated by a pop-up message in the chat box. Rewards from random events include special effects that can be applied to voyages, extra voyage or crew rerolls, and the ability to reroll adventurers or visiting captains for hire.

Depending on which event is received, the player can trigger the minigame by talking to Felix the Black Marketeer to play A Simple Favour, Surula the Barmaid to play Last Orders, or Seasinger Umi to play Helping Hand. The player will be reminded that they have a minigame available by a yellow minigame icon appearing above the appropriate person's head and on the minimap. Disconnecting or logging out during a Random port event will cause you to lose the event, but as long as you have not yet started the event, it will still be available the next time you log in.

Each voyage can trigger a random event. However, when a random event has been awarded but not yet completed or failed, further random events are blocked. Therefore, to maximise random event rewards, it is important to complete any minigame earned.

Felix's random event presents the message: "The Black Marketeer had a little trouble with some assassins. Speak to him to relive the event." In this minigame, the player helps the Black Marketeer work off his debt to the Death Lotus Assassins. The player takes control of Felix and must find 3 out of 5 ninjas hiding in various barrels around the dock, then locate and identify each ninja's victim.

Only one ninja's victim can be searched for at a time. The player first searches for a ninja's barrel (these are easy to identify because the top is open so you can see the ninja hidden inside when the camera is rotated to a top-down view). If the player doesn't find a ninja within a set period of time, an arrow will appear pointing to one. Once the player has found a ninja, the ninja will give a clue hinting at who the intended victim is (one of the Wandering Strangers). The player, still controlling Felix, must then identify the correct victim; if the player guesses incorrectly, the ninja will give further clues to help the player narrow his search. Clues can specify what the target is wearing ("The target is wearing a hat"); colour or style of clothing ("No, the top is the wrong colour", "That's not my target, the top was a different style"); or gender ("Well, that's not right. Completely the wrong gender for a start"). There are no penalties for misidentifying the victim, and no apparent time limits or limits on the number of guesses, so if desired, the player can ignore the clues and simply try all the wandering strangers until the correct one is selected.

Tip: You can see all the remaining ninjas at any time, even though you can only search for one ninja's victim at a time. Try to check nearby barrels as you move around the port searching for victims. That way you'll avoid wasting time running around the port looking for the next ninja.

After completing a voyage, players will sometimes receive the following message: "The Barmaid had a tricky time while the Ship was away. Speak to her to relive the events." For this minigame, the player takes control of Surula and must serve beer to 20 clients in the bar area, upstairs, and nearby outside, all in less than 10 minutes. Surula can hold only 2 beer glasses at once so she has to return to the bar to get more after serving every two customers. Some of the clients will protest that they did not order any beer, but they will still accept it anyway and will still count toward the event's successful completion.

This is the only random event with a time limit, but 10 minutes is far more than enough time. Once a client has been served, the "Serve Patron" option will no longer appear on the NPC. This is a good indicator of whether the patron has been served already or not. Visiting adventurers (Whaler, Assassin, etc.) will be present in the bar during the event and can be clicked on to offer them beer, but they will always refuse, so they can safely be ignored.

When Umi's event is available, the message "Seasinger Umi had a small issue when helping out around port. Speak to her to relive the event" appears in the chatbox. After it appears, talk to Seasinger Umi to take control of her and help her with job, which requires finding hidden items around the storehouse of your port. The Warehouse worker will task you with finding two or three items, giving you a description of the item needed. They can all be found within crates or barrels on the first floor of the lodge. There is no time limit. 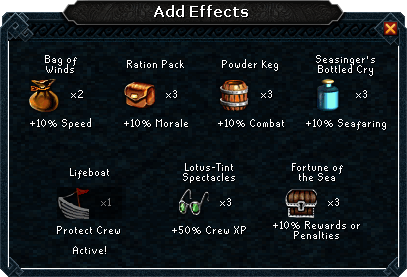 Successfully completed random events will reward the player with various rerolls or effects that can be applied to ships. The possible rewards are

To apply effects, open the Voyage interface, select the appropriate ship (by clicking the ship icons or using the left and right cursor keys), press the button "Add Effect", and select the effect(s) to be applied to the ship. You can also use the "Add Effects" button to check which effects are active on any ship in port. Any effects which have been applied to the currently selected ship will be labelled "Active". The available effects are shown in the table below.

Fortune of the Sea does not apply to experience voyages.

The maximum number of any given reward that can be stored is 3 for most rewards, but only 2 for captain rerolls and voyage rerolls. If getting a reward would make the number held by players exceed the maximum quantity for that reward, they get the message "You already have as many of this item as you are allowed." However, Ration Packs, Powder Kegs and Seasinger's Bottled Cry can all have up to 10 stored, if acquired from voyages. Voyages do not give the same quantity warning that events give. Reroll rewards serve to simply top up or replace things that are topped up or reset at 00:00 UTC anyway, and the usual expiry rules apply. Because of this, you may wish to avoid using them near the end of the day unless you expect to have time to use the benefit they provide.

Retrieved from "https://runescape.fandom.com/wiki/Player-owned_port/Random_events?oldid=22845483"
Community content is available under CC-BY-SA unless otherwise noted.