The Polypore Dungeon is a very deep Slayer Dungeon located under an island in the River Salve, east of the Mage Training Arena and Exam Centre. It was created by a Ramokee Skinweaver who left her tribe because she was born into a role she did not want to fulfil. Out of boredom, she created the monsters that inhabit the dungeon using the local fungi.

Navigating through the several floors is achieved by using the vines that are found on specific platforms on each floor. Stronger monsters are encountered as the player ventures deeper into the dungeon.

All the dungeon's inhabitants and monsters except for the infested axes and the skinweaver wear large skulls on their heads. This includes the Merchant.

The entrance to the Polypore Slayer Dungeon can be found on a small island located in the River Salve, between Mort Myre Swamp and Al Kharid. You can access it by:

The Ramokee Skinweaver who created the dungeon can be found on the bottom floor, perched on top of some mushrooms. On the top floor of the dungeon, near the entrance, is a Merchant. He runs the Polypore Dungeon Supplies store, which sells mycelium web armour, and can also exchange items with players who bring him drops from the monsters of the dungeon.

All non-magical attacks that hit the monsters of the dungeon are capped at 40 life points per hit; as such, Magic is the only way to kill them efficiently. They are also immune to weapon poison. Antipoison of all sorts and the Venomblood perk have no effect against their infestation attack.

Using neem oil on monsters may yield flakes, polypore spores, grimy herbs and Herblore secondaries. It will also cause them to stop infecting the player with toxic fungus for 15 ticks. When used against Grifolaroos and Grifolapines, they will only attack with ranged until the fungus on their backs grow.

A tour of the dungeon

The maps show the typical arrangement of monsters on the platforms. However, monsters always tend to move away from their platforms. Such examples are Grifolaroos and Ganodermic runts that litter the middle floors, as they are seen wandering off to other platforms with other monsters.

Neem drupes grow on vines in three places in the main area of the first level dungeon. Two vines are on the platform containing Merchant and the dungeon's entrance. A third is at the end of the first floor near the rope that takes players to the second floor. The monsters found in the dungeon also drop neem drupes upon death.

With a mortar and pestle and a jug, neem drupes can be squished to make neem oil. When splashed against the fungal creatures, it will remove most of the fungus on them. This prevents them from infesting the player, and in the case for grifolic creatures, forces them to use ranged while the fungus is removed. Neem oil does not last forever and the fungal monster will regrow their fungus after some time has passed. While it hampers kill rates, splashing neem oil on fungal creatures will give various rewards. 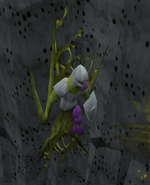 A dead knight embedded in a wall somewhere in the dungeon

A lower level of the dungeon, as seen from the level above it

The first glimpse of the dungeon 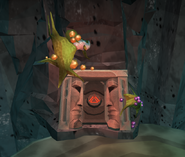 The entrance to the resource dungeon.