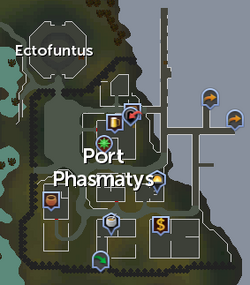 Port Phasmatys (pronounced "Faz-mat-iss"[1]) is a small coastal town located to the far east of the swamp region of Morytania, to the very far north-east of the RuneScape realm of Gielinor, and east of Canifis. The town is especially notable for the Ectofuntus directly north of its gates, its brewery (one of only two in the game), and its furnace, whose distance to a bank is the shortest in all of Gielinor (except for Edgeville but that requires the completion of the Varrock Easy Tasks to use.) Its local newspaper is called the Phasmatys Old Herald.

There are two main entrances: one from the west, and another from the north. Prior to completion of the Ghosts Ahoy quest, entry to the town requires two ecto-tokens while wearing a ghostspeak amulet. After the quest the player may enter the town at no cost, and a ghostspeak amulet is no longer needed unless you wish to talk with the ghosts. A ghostspeak amulet is recommended to access the bank, but not needed if you use the "quick-bank" option. Alternatively, players can arrive on a charter ship. The town is populated by ghost characters, and an Amulet of Ghostspeak or cramulet is needed to talk to the majority of the inhabitants. The town features heavily in the Ghosts Ahoy quest.

Port Phasmatys is the only place in RuneScape where players can wear a bedsheet, which is obtained in the quest Ghosts Ahoy.

The exact date when Port Phasmatys was built is unknown, though it is widely believed that Port Phasmatys was created somewhere around the year 1777 of the fourth age, when many Misthalanian settlers left their homeland for a new life in Morytania.

Phasmatys was a busy market town and was in trade with many places of Gielinor and possibly even the mysterious eastern lands, and was one of the most successful and famous ports on Gielinor until the Vampyres from the Sanguinesti region started to demand Blood tithes on the residents. The people in Port Phasmatys hopelessly turned to Necrovarus, a stranger from the Eastern Lands who somehow knew about the existence of a substance called ectoplasm below the town's temple. He ordered the citizens to dig beneath the temple until they found the lake of ectoplasm. Necrovarus used this ectoplasm to create the ectofuntus which, in turn, created a powerful barrier around the port. This barrier repelled the vampyres, effectively preventing them from invading the town. But it in turn made the citizens also unable to leave the town. With the lack of resources, the citizens died one by one. But even then, the spirits of the citizens were unable to leave the town because of the barrier. Necrovarus, who planned all this, took control over the town. He was using the power of the ghosts and the ectofuntus for his own evil purposes until an adventurer stopped him in Ghosts Ahoy.

One of the rewards from the Ghosts Ahoy quest is the Ectophial, which is a simple, one-click teleport that teleports players right to the Ectofuntus. This is the quickest and most convenient way to access Port Phasmatys.

Another convenient way to get to Port Phasmastys is to teleport to the Catherby docks using a 'Chipped' Camelot teleport and charter a ship to Port Phasmatys. A fairy ring (code ALQ) is located to the west of town.

There is a Bank in Port Phasmatys to the south-east, and players may use the "quick-bank" option even without an amulet of ghostspeak. Prior to the bonfires update, some players liked to train Firemaking in Port Phasmatys because it is reasonably quiet and contains a long east-west stretch of road.

After starting the Ghosts Ahoy quest, players can worship the Ectofuntus to receive four times Prayer experience for every bone. It is a bit of effort, but well worth it for this skill as it is very hard to train. This is even more worthwhile when using expensive dragon bones or better.

Completing the quest will help immensely, as players can use the ectophial to teleport back and forth, and bank at the town if needed.

There is a small ectofuntus in need of repairs inside one of the boats in Port Phasmatys, which is used as a power source.

Phasmatys has one of the closest furnaces to a bank in the game, third only to those in Edgeville and Neitiznot, making it popular for players training Smithing or Crafting. The Port Phasmatys furnace will also allow for smithing of cannonballs at double speed if the medium Morytania tasks are complete and the player is wearing the Morytania legs 2.

The Green Ghost inn and brewery

There is one inn in town, The Green Ghost. It is torn apart like the rest of the buildings, and currently houses Robin Hood.

There is also a brewery in the basement, which members can use via the Cooking skill to make their own ales. It is one of only two breweries in the game, the other being in Keldagrim. Players may buy ale yeast from Metarialus there for 5 ecto-tokens, though they must supply their own empty pot.

There is a vegetable and herb patch used in the Farming skill just to the west of the Alice's farm west of the town. Lyra can look after crops for players here. There is also a farming shop run by Alice where players can buy the usual items for use in farming, as well as undead cows and chickens.

There is a general store in Port Phasmatys, located in the south-west part of the town. The pots and buckets in the store can be handy for praying at the Ectofuntus or brewing ales in the brewery.

Some of the ghosts require payment in ecto-token, which is the currency of the town, though the shop still uses coins. Players must wear a Ghostspeak amulet to trade here, however.

One of the cryptic medium clue scrolls have the location of the chest near the town with the following description: By the town of the dead, walk south down a rickety bridge, then dig near the slime-covered tree.

All of the ghosts within Port Phasmatys' walls (with the exception of Gravingas and some citizens) are shorter than the player.

The following quests are involved with Port Phasmatys:

Players will need ecto-tokens during Animal Magnetism, Ghosts Ahoy, and Rocking Out.

The following music tracks are unlocked in Port Phasmatys:

Retrieved from "https://runescape.fandom.com/wiki/Port_Phasmatys?oldid=24308972"
Community content is available under CC-BY-SA unless otherwise noted.