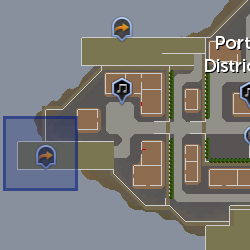 Portmaster Kags is a ferryman in the south-west of the Port district of Menaphos, next to the Menaphos POH portal. He offers transport to the Sunken Pyramid, Menaphos, Pollnivneach, Exiled Kalphite Hive, Nardah, Jaldraocht Pyramid, the Heart of Gielinor, Dominion Tower, and the Crondis pyramid during and after the quest Crocodile Tears.

His distance to the POH portal makes him a convenient method of transport for those with a player-owned house in Menaphos or a Menaphos tablet. Alternately, those with at least 50 souls collected in the Slayer Codex can teleport next to him at the Sunken Pyramid.

Retrieved from "https://runescape.fandom.com/wiki/Portmaster_Kags?oldid=24565873"
Community content is available under CC-BY-SA unless otherwise noted.