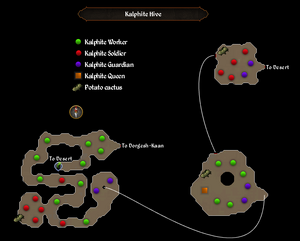 There are a total of 14 spawns in the Kalphite Hive:

Prior to entering the Kalphite Hive, it is highly recommended to bring along a few antipoison potions or alternatively, an anti-poison totem, as Kalphite Soldiers and Kalphite Guardians are poisonous. Kalphite workers and the Kalphite Queen, however, are not poisonous - but be warned that the Kalphite Queen is level 333, and not something you want to run into unprepared.

Potato cactus can be randomly obtained as a reward by gambling two zeal points in the Soul Wars minigame.

Noted potato cacti can be obtained as one of two random rewards from the Box of summoning ingredients, a possible reward from the Familiarisation Distraction and Diversion.

Some of the monsters within the Polypore Dungeon along with Desert strykewyrms drop noted potato cacti.

Potato cactus seeds can be planted in a cactus patch, found in Al Kharid and the Imperial district of Menaphos, to grow a potato cactus plant, which take 560 minutes time to grow if no diseases occur. It will provide potato cacti just like a fruit tree provides fruit; it will keep growing back. The maximum amount of cacti from each patch is 3 (6 with all the Desert tasks complete and possibly more with giant ent familiar).

Retrieved from "https://runescape.fandom.com/wiki/Potato_cactus?oldid=24534715"
Community content is available under CC-BY-SA unless otherwise noted.