Start a Wiki
Not to be confused with Priest (East Ardougne). 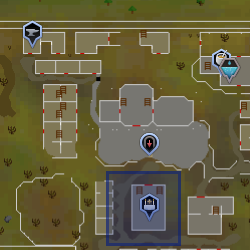 The Priest of West Ardougne is a Saradominist priest that can be found in the chapel in the south of West Ardougne, the plague-infested western half of Ardougne. Unlike his eastern counterpart, he can be spoken to.

If the player chooses to speak to the priest, he will lament at how helpless he is against the plague and how little he can do in the way of comforting or curing the populace of the city, saying "I wish there was more I could do for these people."

After the events of Plague's End, he will be in a more positive disposition as the plague and mourners are gone.

Retrieved from "https://runescape.fandom.com/wiki/Priest_(West_Ardougne)?oldid=24562637"
Community content is available under CC-BY-SA unless otherwise noted.