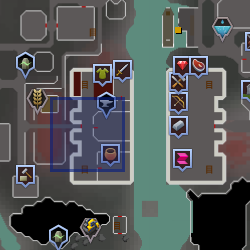 Professor Manglethorp is a gnome professor currently visiting the dwarven capital city of Keldagrim to investigate the dwarves' advancements in technology. He can be found on the ground level of the west wing of Keldagrim Palace, which houses the Consortium.

The gnomes are a diplomatic race, and their desire to establish ties with the Consortium is understandable. King Narnode Shareen has sent Professor Mangelthorp to Keldagrim, so the gnomes can gain a greater understanding of the dwarves' steam-engine technology, which the Consortium has worked to develop in the last 500 years.

Professor Mangelthorp is particularly interested in the blast furnace, a large machine capable of smelting mass amounts of ore with great efficiency. He has also expressed interest in the Mine cart transportation network, which he believes could be useful in reaching mining sites.

Professor Mangelthorp's main purpose is as a customer in the Gnome Restaurant minigame. In this minigame, players must deliver a random item to certain gnomes created through the use of Gnome cooking. To access Keldagrim and thus reach Manglethorp, players must have started The Giant Dwarf quest; however, there are no requirements to do this.

Retrieved from "https://runescape.fandom.com/wiki/Professor_Manglethorp?oldid=24562868"
Community content is available under CC-BY-SA unless otherwise noted.