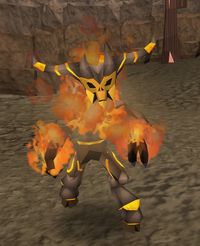 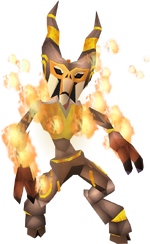 Pyrefiends are Slayer monsters that require level 30 Slayer to kill and are not to be confused with a pyrelord - a Summoning familiar. They are the weaker elemental cousin of the waterfiend, but stronger than some icefiends except the ones at Ghorrock Fortress. Also, they have very similar drops to those of lesser demons and harpie bug swarms, and are notable for their relatively high drop rate for level 2 clue scrolls. The death animation of pyrefiends was greatly sped up as of 9 November 2009 when they were removed from Ghorrock Fortress. Note several glitches occur when fighting pyrefiends such as drops showing up behind the player, combat taking place either in the same square as the player or with a one square gap between the player and the target while using melee attacks. However, these glitches do not affect the drops or combat.

Despite their level, they have higher accuracy than many other monsters of a similar level, so food is recommended for lower levelled players. It is also recommended that you either mage or range them, since they have moderate melee defence due to being mage monsters. 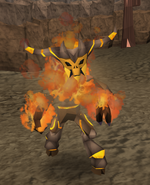 A pyrefiend with horns pointing to the side.

A pyrefiend with horns pointing up.
Click an image to enlarge

Retrieved from "https://runescape.fandom.com/wiki/Pyrefiend?oldid=22386674"
Community content is available under CC-BY-SA unless otherwise noted.