He used to be a full master until he got too old. 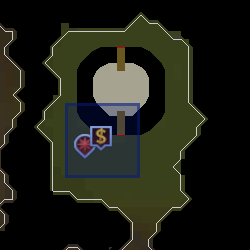 Herbert the Quartermaster is a farmer involved in the Cabbage Facepunch Bonanza and may be found by the starting area in Gamers' Grotto. He will give players some information about the minigame and also gives the rewards relating to it. The full list of rewards he offers may be located here.

He reveals that before the events of the spring event, he was a resident of the Lumbridge area attending to a few fields of crop. He saw both Marimbo and Brassica Prime appear from the sky near him and then proceeded to honour him, with Brassica Prime praising his nobility in farming cabbages and Marimbo for "looking like her followers". He now somewhat considers himself a priest for both factions, noting that he should get a big "priesty hat", and acts as the rewards trader for the event and minigame.

During the initial event, he sold players cosmetic cape overrides for each of the factions while also selling items related to Slayer, Farming, and Mining.

Retrieved from "https://runescape.fandom.com/wiki/Quartermaster_(Cabbage_Facepunch_Bonanza)?oldid=25382821"
Community content is available under CC-BY-SA unless otherwise noted.