For a more up-to-date version of this page see here. 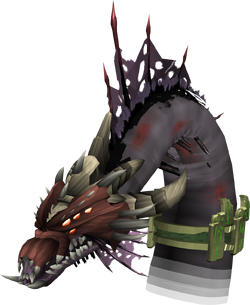 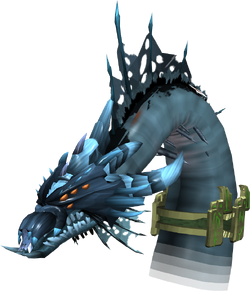 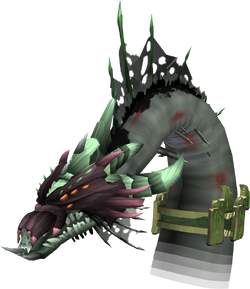 The Queen Black Dragon is a very powerful dragon slumbering at the bottom of the Grotworm Lair. She was the first dragon ever created, created by the dragonkin Kerapac, and is the mother to all dragons, though the most unique of her "children" were the white dragons. Level 60 Summoning is required to enter her chamber, an area that can only be accessed alone. Waking her and fighting her effectively requires practice, apt reflexes, and high-level gear. Returning her to slumber rewards the player with a hefty reward and additionally Slayer experience if assigned a black dragon task. Wearing Dragon slayer gloves while activating the last crystal will grant bonus Slayer experience.

Defeating the Queen Black Dragon at least once is one of the requirements of redeeming the Dragonkin lamp from Mr. Mordaut.

Obtaining all unique drops will unlock the [Name] the Experiment title.

The Queen Black Dragon resides in the lowest level of the Grotworm Lair. To reach her, enter the caves and slide down the worm burrow shortcut on the first level, requiring level 50 Agility. This will take you to the bottom level of the lair. Players without level 50 Agility must traverse the three levels of the cave to reach the bottom.

There is a portal to the heart of the caves, leading to the Queen. It requires level 60 Summoning to enter. Once inside, there is no exit – the only way to leave is through teleportation, death, or victory. You will end up in a partially submerged arena, with the dragon sleeping. Once she wakes up, the battle begins.

A player entering the Summoning portal at the end of the Grotworm Lair.

The Queen Black Dragon hatched from an egg mentioned in the first dragonkin journal. The egg was infused by Kerapac with his own lifeblood in an experiment to try and create a new type of dragonkin that would not be cursed to feel pain whenever the Stone of Jas was used by False Users.

The second dragonkin journal describes the time after she hatched. Kerapac noted she was intelligent and possessed many of the powers a dragonkin does such as breathing fire, as well as inheriting his magical powers. However, he noted that her large size prevented him from manipulating her powers. He considered channelling them into smaller vessels for him to use. She apparently seemed to solve it on her own by channelling them into tortured souls.

The third dragonkin journal tells of other dragonkin attempting similar experiments, one resulting in the creation of the King Black Dragon. Despite him being a significantly weaker version, Kerapac attempted to use them for breeding.

These offspring were deemed to be an abject failure. The fourth dragonkin journal describes them as "broken" and "bestial". Kerapac was enraged and wanted to kill both the King and Queen, but he regained composure and released the King Black Dragon into the wilds, where he would eventually be Hannibus' mount during the God Wars. As for the Queen, he had used his own blood to create her, and despite being a failure, still had a large amount of raw power that could be useful in the future. He created four artefacts designed to protect and imprison her before leaving.

Sometime after being imprisoned, a siren named Remora found and tried to heal the Queen Black Dragon, and eventually ended up trapped inside her. She used Remora to lure the souls of many men for her dreams, until The Raptor and an adventurer freed the siren, although it woke her up temporarily, as they burst a cyst the siren was held in. Enraged that her dream was disturbed, she breathed a plume of fire at the trio, killing Remora before going back to sleep.

During the events of One of a Kind, Hannibus and the same adventurer revisited her while she was sleeping for a clue to get Hannibus back home to his realm. She telepathically talks through Hannibus, having a good dream where an Ilujanka would be unable to dominate her. If battled before, she recognizes the adventurer as a "cruel dream", but allows them to ask her any question. Upon mentioning the dragonkin, she becomes enraged and labels the adventurer as a "nightmare-thing". Hannibus manages to subdue her and the two leave before she is able to wake up and attack the "nightmare-thing".

During the 2017 Christmas event, Santa Claus, wanting to create the perfect child, went to the Queen Black Dragon to imbue a clockwork gnome with her dragonfire after Thurgo suggested it, claiming that if it worked on royal crossbows, it should work on the clockwork gnome too. Santa visited the Queen Black Dragon, who subsequently swallowed him while destroying his sleigh and killing Rudolph, leaving behind his ashes. The adventurer visited the Queen Black Dragon, who she swallowed up. Inside, they would find Santa and the gnome before casting a fire spell on one of her sacs, freeing all three. They left before she could regain consciousness and attack.

After restoring the enchantment and returning the Queen to her slumber, you may enter a rewards room with a dragonkin coffer containing your spoils. Four or more different rewards are received at once. You receive the 100% drop, as well as one drop from the Consumables section and then another drop. All unique drops, the draconic visage, and the Queen Black Dragon scale are tertiary drops.

Rewards are not noted. There are options to "Bank all", "Take all", and "Abandon all" - along with right click for all 3 options on each item. "Take all" option results in the player's inventory being full of all of the unnoted items of that variant. You can also use the "Abandon all" option, which discards all of the items from the coffer. Items stay in the coffer until you log out or leave the chamber. Having tier 3 or higher luck will affect the drops in the chest.

If the player clicks on the coffer but does not claim the rewards, and later logs out or loses connection, the rewards will be sent to the player's bank.

Collecting all four dragonkin journals is a requirement to trim the completionist cape and to obtain the master quest cape.

The concept art of the Queen Black Dragon.

The supposed-to-be lair of the Queen Black Dragon.

The concept art of the treasure room.

The entrance to her lair.

Being eaten by the dragon.

The Queen Black Dragon's health bar. Note the four crystals at the top.

A player claiming their reward after laying the mighty foe to rest.