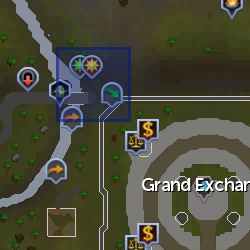 Quercus is an old ent that hosts information for the Wilderness Warbands Distraction & Diversion. He can inform players of nearby warband camps in the wilderness that are setting up, and requests players to intercept them to keep the balance. He will exchange any camp supplies looted from the warband tents for either an experience reward or coins. He is located on the Wilderness Wall between Edgeville and the Grand Exchange.

Like all ents, Quercus is a Guthixian that was brought by Guthix to Gielinor in the First Age to tend the trees using the power of the Anima Mundi.[1] As of Guthix's death, it is likely that Quercus is attempting to protect the world from another God Wars by gathering adventurers to eradicate the bandit warbands.

Retrieved from "https://runescape.fandom.com/wiki/Quercus?oldid=25382295"
Community content is available under CC-BY-SA unless otherwise noted.