Quests are groups of interrelated tasks, usually involving a storyline, that can take anywhere from a few minutes to a few hours or even a few days to complete.

) on the minimap, and completing them can provide rewards ranging from experience and items, to access to new areas, minigames and miniquests.

The most recent quests added to the free and members' version of RuneScape are Gower Quest and You Are It, respectively.

Many RuneScape quests are a part of a series of quests that share a common plot-line.

Progress in a quest series is made in a linear fashion, with each quest requiring the completion of the previous one. There are, however, a few exceptions to this progression, and are found usually when a quest is involved in multiple plot-lines. Also, Jagex has reworked many of the novice quests over the years; so far, over a dozen quests have received this treatment, some more than once.

The majority of the quest series are based out of a specific area, and their completion is often needed to access either more of that area or specific features within it. For example, West Ardougne as a whole is inaccessible unless at least some progress is made in the Plague quest series.

A bottle quest is a quest developed using minimal new assets, usually with a focus on characterisation and world-building.

The tone and complexity of a bottle quest can vary significantly, from serious quests with only a few new assets such as Wanted! or A Clockwork Syringe, to more lighthearted affairs with a number of new characters and locations, such as Call of the Ancestors and Back to the Freezer.

A subquest is a part of another quest, which upon completion gives additional rewards as well as quest point(s). Subquests may take less time and require fewer items, although they may have additional skill or quest requirements.

A repeatable quest is a quest that can be played over and over again so a player could experience the story again or explore different paths based on a choice. The quest rewards and choices made are canonical on the first play through, though replays can allow the player to unlock other follow up rewards.

Miniquests are smaller pieces of story and skill content that are not required for the quest point cape, but still tell stories similar to quests. Most miniquests are smaller in scale and shorter than a normal quest, but may have requirements stretching higher than normal quests or none at all. They are usually connected to existing pieces of content or used to tie up loose ends from quests, but some are standalone. They are often released as a hidden update.

Currently, one series of miniquests exists, namely Tales of the Arc.

The table below shows the highest level required in each skill to complete every released quest.

The quests requiring the highest skill levels are:

Players who have the maximum number of quest points are able to wear the quest point cape, a Cape of Accomplishment which can be purchased from the Wise Old Man for 99,000 coins. However, whenever a new quest is available, the cape and hood will automatically be unequipped and cannot be worn again until the player completes the new quest.

If the inventory is full upon release of a new quest, the cape and hood will be sent to the bank. If the bank is also full, the Wise Old Man will hold onto it and will return it free of charge.

If multiple sets are obtained through various methods, the Wise Old Man will only return one set if both your inventory and bank are full and the set is worn and unequipped(ON) twice. In other words, if the Wise Old Man has a set and you do not claim it and get another set unequipped and sent to the Wise Old Man, only one set will be reclaimable.

Some quests award the player with titles upon completion, while others require the player to complete a post-quest activity to unlock a title.

A few titles are not directly unlocked by completing a specific quest:

Over time some quests became outdated and were felt to not fit in with the progression of RuneScape or the developing lore of Gielinor. These quests were reworked into updated forms or replaced with new ones. Note that this only lists significant reworks, minor reworks to graphics and dialogue are not listed.

All quests that have a "Quest overview" window also have a unique quest icon. These are currently limited to:

These icons are displayed both in the quest overview window, and as small boxes next to quest-specific NPCs and objects. It is unknown whether all quests will eventually be renovated to have this property. 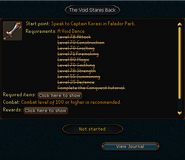 Aggie the witch in Draynor Village, showing her right-click options with the miniature icon for the Swept Away quest