Radimus is the Grand Vizier of the Legends' Guild. 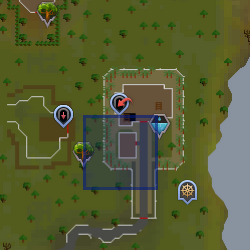 Radimus Erkle is the Grand Vizier of the Legends' Guild and is in charge of admissions into the guild. He is the brother of Siegfried Erkle, who runs the Legends' Guild Shop of Useful Items. He will send players off to complete the Legends' Quest as proof that they are worthy enough to enter the guild. The While Guthix Sleeps quest must be started by talking to him although he will not allow players to start the quest until they have the requirements. He also holds the Radimus notes, the map used to get into the Kharazi Jungle.

In his youth, he was an adventurer, travelling with others such as Dionysius and Xenia for several years in a previous mapping expedition of the Kharazi Jungle and together they made a partial map of the Kharazi Jungle, until the Jogre War began, and they were unable to complete their maps.

In approximately the year 149 (according to Xenia, roughly 20 years ago), he founded the Legends' Guild with Xenia to coordinate and nurture younger adventurers, along with the Champions' and Heroes' Guilds, after retiring from adventuring. Radimus Erkle became known as the Grand Vizier of the Legends' Guild, and his first assignment to prospective entrants to the guild is for said adventurer to finish mapping the jungle.