Start a Wiki
OS
This article is about the main quest. For the miniquest, see Rag and Bone Man/Wish list.
[view] • [talk]

Rag and Bone Man is a quest during which the adventurer collects bones for the Odd Old Man.

Everybody needs some body, and the Odd Old Man knows exactly which bits of those bodies he needs. Can you help him finish his extensive and extremely creepy collection?

Here's a list of the creatures you need to kill to obtain bones, and their locations (Talk to the old man before you begin gathering).

Once you have collected the bones, go to Draynor Village and talk to Fortunato (found by the market square) there. He will be able to sell you some jugs of vinegar for 1 coin each. Do not steal from the market stall or he will not talk to you unless you use vial of stench (a)). After you buy 8 Jugs of vinegar talk to the Odd Old man for further instructions. You can buy the Jugs of vinegar and add it to the pot without talking.

Talk to the Odd Old Man and give him the polished bones to complete the quest. 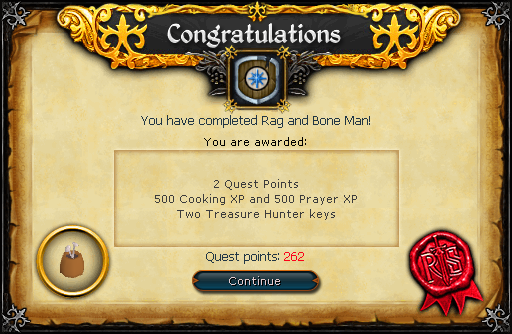 Completion of Rag and Bone Man is required for the following:

Retrieved from "https://runescape.fandom.com/wiki/Rag_and_Bone_Man?oldid=24928161"
Community content is available under CC-BY-SA unless otherwise noted.