This article is about the main quest. For the miniquest, see Rag and Bone Man/Wish list.
[view] • [talk]

There are two parts to the Rag and Bone Man quest. The bones needed for the first part are easier to obtain compared to the second part. The second part is a list of bones posted on the wall of the Odd Old Man's hut. The names of the bones in this Wish List will be taken off as they are turned over to him. This part of the quest is no longer needed for the Quest Cape.

Here's a list of the creatures you need to kill to obtain bones, and their locations (Talk to the old man before you begin gathering).

Talk to the Odd Old Man and give him the polished bones to complete the quest. 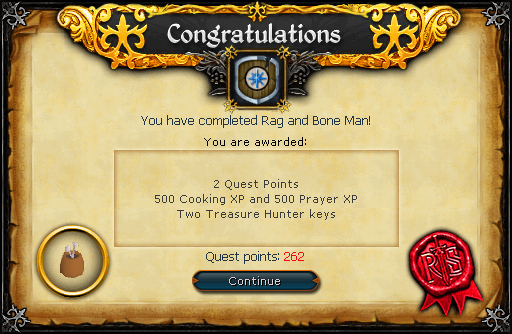 Completion of Rag and Bone Man is required for the following: