Start a Wiki
For other uses, see Raids (disambiguation).

Raids are high-level group combat activities that take place on Mazcab, the Goebie homeworld. Players protect goebies[1] by fighting bosses in ten-player teams, and will be rewarded with high-level armour, such as level 90 Defence tank gear, new abilities, and more.[2]

Currently only one raid is available, the Liberation of Mazcab, which features Beastmaster Durzag and Yakamaru. In order to get to the next boss, all participants in that fight will need to have killed the previous bosses at least once. The participants will be able to skip previous defeated bosses until the last boss is looted or the fight is reset.

The Liberation of Mazcab bosses drop abilities and pets. All players will receive their own loot from the boss after it dies. Players can kill the bosses as many times as they want during the day, but they can only loot the same boss once per two days. The mechanics of the bosses are dependent on the actions of the players.

The bosses drop Achto versions of the tier 90 equipment, which compared to their inferior versions do not degrade to dust and can be repaired with coins via the armour repair stand in your POH. They can also drop Mazcab codices which can be traded with other players or used to unlock special abilities only obtained from Raids. In addition, they give Teci upon defeat, Raids currency which allows them to buy the inferior versions of the armours and one-ability codexes from the Armoursmith near the Pit of Trials at his shop.

In addition, each Liberation of Mazcab boss has 5 achievements. These achievements range from surviving NPCs to repeating the whole boss fight again. Once all 10 achievements are completed, the title "the Daredevil" is unlocked. 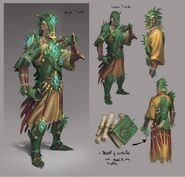 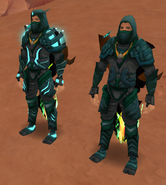 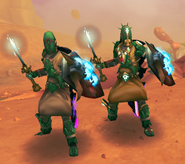 Retrieved from "https://runescape.fandom.com/wiki/Raids?oldid=24927701"
Community content is available under CC-BY-SA unless otherwise noted.