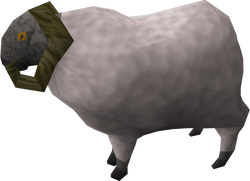 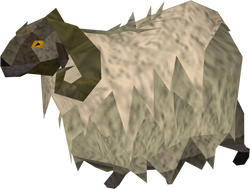 A ram is a male sheep. While rams look like sheep and always spawn in the same area, players cannot shear them. Players who try to shear a ram will receive the message "That one looks a little too violent to shear..."

Rams everywhere, regardless of location, will give 32-34 experience and always drop bones. As they are a low level creature, low level players will gain benefit from killing these monsters as their bones are worth quite a bit and their experience isn't half bad for a level 2 monster.

However, in terms of money making for new players, cows are better to kill as they drop more, and spawn in larger groups, so it's really up to the player which monster they want to kill.

While doing the Odd Old Man's Rag and Bone Man quest, rams have a chance to drop a ram skull.

Retrieved from "https://runescape.fandom.com/wiki/Ram?oldid=24926920"
Community content is available under CC-BY-SA unless otherwise noted.