Lumbridge, near the general store.

Nemarti looks ready to teach you about ranged combat. 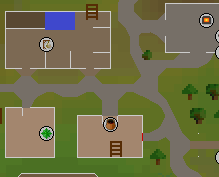 Nemarti was one of the Combat instructors, known to be the Instructor of both Ranged and Fletching. She was located in the building north of the Lumbridge general store. While she was most likely intended to help new players, she gave information about Ranged in combat.

In the past, she would give out a training bow and 25 training arrows to any player every half an hour, unless they had the arrows and bow in their inventory or in their bank. Players could either take the bow and arrows from her, or take Air and Mind runes from the Magic combat tutor nearby. The training bow and arrows could be bought from Beefy Bill for 55 coins and 8 coins, respectively.

On 14 July 2008, the Three Cheers for Lumbridge! update allowed the Ranged instructor to give out jobs and reward players provided that they do their job. However, this feature was removed after the tutorial update on September 2009.

Retrieved from "https://runescape.fandom.com/wiki/Ranged_instructor?oldid=24925498"
Community content is available under CC-BY-SA unless otherwise noted.