Ranis Drakan is one of the two Vampyres, alongside his sister Vanescula Drakan, who, together, run Meiyerditch for their brother Lord Lowerniel Vergidiyad Drakan. Ranis is more involved in Darkmeyer society than either of his siblings. Ranis is very arrogant and egoistic, often patrolling Darkmeyer simply to show himself. He polices the upper tier, and keeps an eye out for those who fall out of line. His temper is short, he tends to dislike the company of others, and is feared and respected by a great number of the Vyre. Whether he cares about that is another matter. Unlike his sister, he blindly listens to his brother and enjoys torturing the citizens (or prisoners) of Meiyerditch.

Ranis is seen during Darkness of Hallowvale quest in a cutscene with his sister and Vanstrom Klause, talking about the blood tithe's progress and enjoying Vanstrom's fresh treat. He then flies off to Castle Drakan. During The Branches of Darkmeyer, Ranis intercepts a Myreque private's way to the Arboretum, not entirely fooled by their vampyre disguise. Giving them a painful blood mark, he allowed them to enter the arboretum. After hearing sounds of the Blisterwood Tree being chopped, Ranis realised that it was a human and stormed into the arboretum to kill them. At that point Vanescula walked in as well and murdered her brother, blaming it on the Myreque. 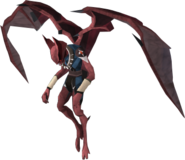 Ranis, in the centre, with Vanescula Drakan and Vanstrom. 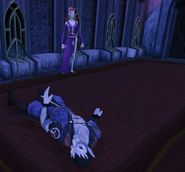 Retrieved from "https://runescape.fandom.com/wiki/Ranis_Drakan?oldid=24924935"
Community content is available under CC-BY-SA unless otherwise noted.