The Rat Pits was a members-only minigame that involved cats. Playing this minigame required the completion of the Ratcatchers quest. This was a "Dangerous" minigame, as cats could die here.

The Rat Pits were made inaccessible on 11 April 2016 due to supposedly poor quality of the content, while the Ardougne ones were completely removed.

There were four rat pits in RuneScape. These pits were located in:

As lazy cats were not allowed, the player would have to train it to become wily again before it was allowed in the minigame.

A bet must have been placed by both players, and must be the same for them, before the game began. 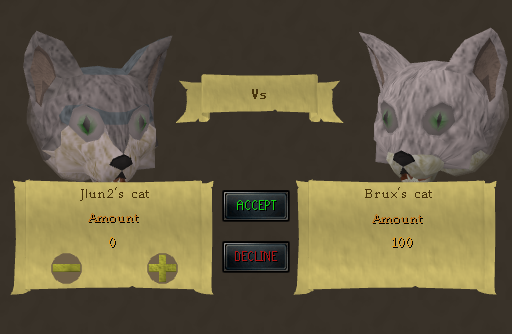 If the player had a catspeak amulet, he or she could discuss a strategy with their cat. Due to a glitch, the cats and rats were invincible starting from the Evolution of Combat update.

Note: If a player was not wearing the Catspeak amulet, the cat's stats would remain unchanged and it could die, in which the player lost both the fight and the cat.

Once the bets were placed and the strategies chosen, the cats began to kill rats. The number of rats that need to be killed before a cat won depended on the type of cat. If a cat ran away or died, the owner of the cat would lose the bet. However, the cat would only be lost if it died. In the case that both cats tired out at the same amount of kills, the match was declared a draw and both cats and bets were returned to their owners.

The game only rewarded coins. There were no other rewards given, and items could not be staked.

Victory
The jingle that played when winning a fight in the pits.

Loss
The jingle that played when losing a fight in the pits.
Retrieved from "https://runescape.fandom.com/wiki/Rat_Pits?oldid=24924022"
Community content is available under CC-BY-SA unless otherwise noted.