A local villager of Mort'ton. 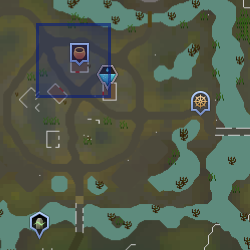 Razmire Keelgan is located at Mort'ton and runs both the general store and the store with building supplies. He is afflicted at first, but can be cured either by using Serum 207 (temporary) or Serum 208 (permanent) on him. He will not sell any supplies until you kill five Loar shades and show him their remains after initially curing and talking to him. He plays a role in the Shades of Mort'ton quest.

If a player has completed all of the medium Morytania achievements, olive oil in his store will automatically become 4 dose olive oil. He will also give free planks once a day, offering a choice of one of the following:

Retrieved from "https://runescape.fandom.com/wiki/Razmire_Keelgan?oldid=24920951"
Community content is available under CC-BY-SA unless otherwise noted.