When you're in the strange dimension, you'll find the Culinaromancer, four white portals that lead back to the dining room, and one of your previous quest bosses. You will fight the bosses in sequence one by one, beginning with Agrith Na-Na.

The Culinaromancer is too strong to be defeated until you've defeated the first five bosses. You can leave and stock up after defeating one boss without losing your progress in the fight. Sharks or higher healing foods are recommended during the fights, especially if you have low defence or little armour. If you try to enter the portal before finishing Desert Treasure, a message will appear saying "You need to have completed Desert Treasure to access this portal." Likewise if you have not yet completed Horror From The Deep.

You can and should bank after each kill to restore potions and food! Also, check each boss's page before the battle for specific advice on fighting that boss.

Before you enter the portal for the first time, Gypsy Aris will warn you that inside the dimension your prayers will not work at all.

Important notes for the battle

Until the Gelatinnoth Mother, it is quite easy to range all of the bosses. With 80+ in all combat-related levels and decent equipment, expect to use very little food items per fight. It is possible to tank the Gelatinnoth Mother and attack for about 20 seconds every rotation with ranged, but simply exiting and returning with mage equipment would be much easier.

When you are ready, enter the portal in the dining room of Lumbridge Castle.

Agrith-Na-Na is Agrith-Naar from the Shadow of the Storm quest, but he is now made of bananas and is level 89. He uses melee up close and Fire Blast at a distance. He also teleports you close to him if you run from him. You may kill him however you like, although he is weak to ranged. He drops one banana.

Flambeed is Fareed from Desert Treasure but now level 89. You need Ice gloves to wield a weapon against him, including staves/wands. He's harder to defeat without prayer, but you should just kill him however you like with lots of food. He's weak to water, so if you're maging, be sure to use Water spells. Ancient magicks hit very high as well, particularly ice spells. If you're ranging, use Ice arrows, or if your Ranging level is 70+, you are also able to simply use a Dark Bow with any type of arrows you wish, however Ice gloves are still required. If you do not have Ice gloves, an item in your inventory with the lowest value will be sent to bank to make room for your weapon.

Karamel is essentially the female counterpart of Kamil from the Desert Treasure quest, and is level 89.

She is weak against crushing weapons. Melee will defeat her fairly quickly, so your stats aren't completely drained. When fighting up close, if your armour has decent magic and melee defence bonuses, you may not need food at all, or even not take damage at all.  Unlike her male counterpart in Desert Treasure, Karamel's melee attacks rarely do any damage. When defeated, she drops a Choc-ice.

Unless you kill her quickly, Karamel will eventually drain your stats all the way to zero. If you wish to regain your stats, you will need to drink a Super restore (fastest way), enter and exit Daemonheim, or intentionally get killed in a player-owned house or a minigame such as the Duel Arena or the Fight Kiln.

Dessourt is Dessous from Desert Treasure, and is level 92. Melee doesn't work very well on him, but ranged (specifically thrown weapons) does. Bring lots of food, and then defeat him as quickly as possible. With melee weapons, he can be fairly hard to hit, so it is not recommended. If ranging, it is advisable to wield the best thrown weapons available. Sagaies are very effective in dispatching him, and can be used with a shield.

Gelatinnoth Mother is the Dagannoth Mother from the Horror from the Deep quest and may be the hardest to kill. She is level 91. She uses melee up-close (which is strong) and ranged from a distance (which is weaker). She changes colour as she fights, and her colour shows her weakness. Using magic enables you to cover four of her six colours with one set of armour and weapons. However, even if you plan to primarily fight with magic, Ranged armour or a balanced-defence armour is recommended to protect against this monster's melee and ranging attacks. Her weakness cycle is as follows:

It is advisable to bring a good slash weapon to cover her orange phase, and either sagaies, dragon darts, or Blisterwood stakes (if unlocked during The Branches of Darkmeyer) to cover her green phase.

After you've defeated the Gelatinnoth Mother, the Culinaromancer himself will attack you ("You have caused me enough grief!" he will tell you. "I guess I will have to finish you off myself!"). He's level 98, can deal damage in the 400s, and has no weakness. He uses only magic (his spell cast looks like a cake with white frosting and sounds like Water Wave) but tries to get up close to attack. Kill him with any attack, and bring food. He is a much easier opponent than the preceding monsters: If you are close to his combat level, you should have no trouble defeating him relatively quickly if you use a ranged setup. Although keep in mind that he has high accuracy; you shouldn't let your guard down. 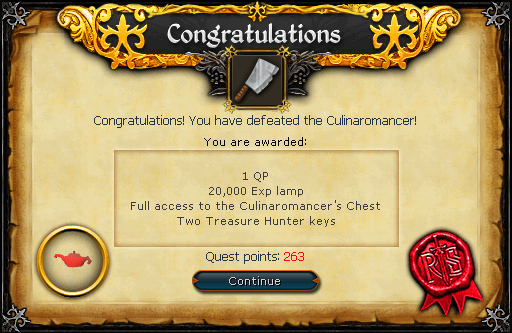 Retrieved from "https://runescape.fandom.com/wiki/Recipe_for_Disaster:_Defeating_the_Culinaromancer?oldid=20884211"
Community content is available under CC-BY-SA unless otherwise noted.