Male players should switch genders at the Makeover Mage's house which is North of the Crafting Guild before starting this quest as it cannot be completed as a male. You also need to store ALL equipment and anything in your inventory to be able to start the puzzles.

Before talking to Sir Tiffy Cashien, read the Lady Table section below as her test starts right away and will be failed if not paying attention.
The tests may not appear in this particular order so be sure to read all the different puzzles prior.

Notice which type of metal only has three statues rather than four, memorise those three weapons being wielded by the statues and identify the one that wasn't there before.

If you were sentenced to death, what would you rather choose, thrown into a lake of acid, burned over a fire, fed to wolves that haven't eaten in 30 days or being thrown off a castle turret?

Being fed to the wolves.

I dropped four identical stones, into four identical buckets, each containing an identical amount of water. The first bucket was at 32 degrees Fahrenheit, the second was at 33 degrees, the third was at 34 and the fourth was at 35 degrees. Which bucket's stone dropped to the bottom of the bucket last?

A father is 4 times as old as his daughter. In 20 years he will be 2 times as old. How old is the daughter?

Counting the creatures and humans in RuneScape you get about a million inhabitants. If you multiply the fingers on everything's left hand by a million, how many would you get?

There are 3 false statements. 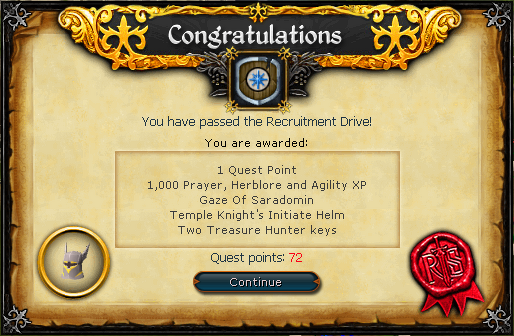 Retrieved from "https://runescape.fandom.com/wiki/Recruitment_Drive/Quick_guide?oldid=23309076"
Community content is available under CC-BY-SA unless otherwise noted.