Red Dragon Isle is a location that stretches from level 41 to 47 Wilderness. Player-killers may frequent the area, so do not bring items that you are not willing to lose. As the name suggests, it is home to several red dragons. The landscape is even more charred than the wilderness around it, and dragon eggs sit on the ground in various spots. This is not a popular training area, as it is in deep wilderness. However, there are safe spots if players wish to train on the dragons using ranged attacks or with a halberd, and there are white berries there that respawn very quickly, which bots often collect and sell for a decent profit. It is possible to attack the red dragons with ranged or magic from the other side of the lava and telegrab the drops, which is also an easy way to avoid PKers. An anti dragon shield or super antifire potion is a must if players wish to visit this deadly part of the wilderness. 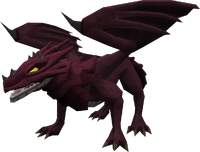 An agility shortcut, requiring level 54 or higher, was added on the 3rd July 2012 to allow easier access to the isle. 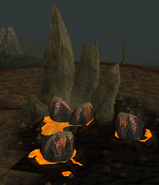 The entrance to the isle
Click an image to enlarge
Retrieved from "https://runescape.fandom.com/wiki/Red_Dragon_Isle?oldid=22907504"
Community content is available under CC-BY-SA unless otherwise noted.