A red banana is a type of banana found on a tree on the west side of the Ape Atoll. The only way to pick a red banana is to use a rope on the red banana tree while wearing a gorilla monkey greegree. It is used for Freeing King Awowogei in the Recipe for Disaster quest to make a stuffed snake dish fit for a monkey king. It also heals 50 life points if eaten.

After freeing King Awowogei, you can no longer pick the red bananas. When you eat a red banana, you get a message, "You eat the red banana. It's tastier than your average banana."

You can only pick a red banana after investigating King Awowogei in the Lumbridge dining room. You are only allowed to pick one at a time, but more can be obtained through the drop trick. 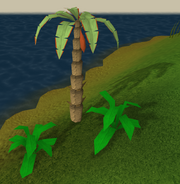 A player picking a red banana from the tree
Click an image to enlarge
Retrieved from "https://runescape.fandom.com/wiki/Red_banana?oldid=24537947"
Community content is available under CC-BY-SA unless otherwise noted.
... more about "Red banana"
RDF feed
Is members only
true +
Release date
March 15, 2006 +
Value
5 +
Weight
0.028 +