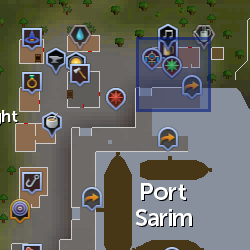 Redbeard Frank is a pirate bosun currently docked in the Asgarnian port-town of Port Sarim or at the end of the most north-eastern pier in Port Sarim. Redbeard was once the first-mate of One-Eyed Hector, a famous pirate general present at the Battle of the Archipelago. Since then, he has risen to the rank of captain, and has gained an insatiable thirst for Karamjan rum.

Frank is the starting point of the Pirate's Treasure quest, and also plays a large role in the Rocking Out quest. If asked to trade, he'll comment that "Customs is on the warpath."

He will also start the easy Falador achievements.

Frank was present at the Battle of the Archipelago, during which the pirates of Mos Le'Harmless, under Gentleman Mallard, attempted to defeat the infamous Rabid Jack. Redbeard played a relatively minor role in the battle, although he did prove a great asset to his captain, Hector.

Following Hector's eventual death, Frank became the ship's new captain. He is currently docked in Port Sarim, although his ship and crew are nowhere to be seen.

In 19 September 2009, known as the International Talk Like a Pirate Day, when a player talked to Redbeard Frank while having a piracy book, Redbeard Frank sang.

During Pirate's Treasure, players must smuggle Karamjan rum onto the mainland for Frank, who has offered them access to Hector's old treasure. Players must smuggle the illegal drink in on a banana shipment from Luthas's plantation in Musa Point, Karamja.

Once players get him the rum from Wydin's local grocery store, they must bring it to Frank, who will then give them the key to Hector's chest in the Blue Moon Inn in Varrock. This, in turn, will point them to Falador Park, where the treasure is buried and the quest is completed.

During Rocking Out, players must get Frank's mark so that Young Ralph, an inmate of the Rock Island Prison, will tell them the tale of the Battle of the Archipelago. Frank, unconvinced that Rabid Jack has returned, will ask them to get proof from Brother Tranquility, a monk on Harmony Island who played a large role in The Great Brain Robbery quest.

When players bring the letter to Frank, he will remain unconvinced, and ask that they instead get a signature from Captain Donnie, the captain of Jack's ship The Inebriated. Eventually, the player manages to get the signature from the pirate 50% Luke, convincing Frank to give them his mark.

In the past, Redbeard Frank used to sing a song, which can be seen below:

Three dead beasts on the Barrows chest!
Yo ho ho and some Karamjan rum!

The Wise Old Man has done for the rest!
Yo ho ho and some Karamjan rum!

The Beast was fixed on an elven pike,
The Queen brained by a Verac Flail spike,
And TokTz-Jad's throat was marked belike,
By the Karil's crossbow it had been speared,
And they lay there dead, no longer feared,
Slain by an old man with white a snow-white beard!
Yo ho ho and some Karamjan rum!

Three great beasts of dread, renown and fear!
Yo ho ho and some Karamjan rum!

Dead, and Runescape shall not shed one tear!
Yo ho ho and some Karamjan rum!

Retrieved from "https://runescape.fandom.com/wiki/Redbeard_Frank?oldid=24562288"
Community content is available under CC-BY-SA unless otherwise noted.