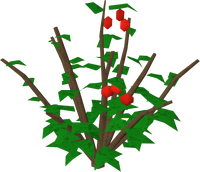 Redberry bushes are located south-east of Varrock and can be picked for two sets of redberries. There are 2 bushes at the location, not to be confused with the nearby 3 cadava bushes with paler leaves and purple berries. There is no longer a redberry bush around Draynor Village. These bushes (not grown using the Farming skill) give two berries each before being depleted, and take 125 seconds to respawn their berries.

Redberry bushes may also be planted with the Farming skill. Farmed redberry bushes give players four sets of berries before growing new ones. The bush makes a new redberry once every few minutes, so if players require more than four redberries, it is recommended that you do not dig it up immediately.

Redberries are used in multiple quests, notably for red dyes and redberry pies, which are necessary for completing The Knight's Sword quest and Goblin Diplomacy. Since redberry bushes take a while to respawn redberries, players often 'world hop' in order to reduce time.

For players with a Woodcutting level of 60 or higher, a bush patch is located near a group of four yew trees, to the west of Rimmington. It is convenient to check on your redberry bush periodically as you train Woodcutting. There is also a bush patch next to the Champions' Guild, which happens to be quite near a canoe tree, so this can prove to be quite advantageous in terms of making trips to the Grand Exchange.

Retrieved from "https://runescape.fandom.com/wiki/Redberry_bush?oldid=20962825"
Community content is available under CC-BY-SA unless otherwise noted.