The Rellekka Hunter Area Dungeon is a pair of ice caverns found in the Rellekka Hunter area, under a rock near the northern coastline. The quest Glorious Memories must be partially completed to gain access to this dungeon. During the quest, players are led to the rock by Nial Swiftfling's footprints and must use a pickaxe on the rock to create an entrance hole.

The main chamber is full of aggressive Gnoeals that attack with magic and Yetis that attack with melee. In this dungeon players can easily be attacked by both combat styles at once. The yetis and gnoeals also attack one another and a pair of fighting monsters will ignore the player if the player leaves them alone. If the player attacks one of a fighting pair, the attacked monster will often (not always) switch opponents and target the player. (This has been confirmed for the yetis but not for either the aggressive or non-aggressive gnoeals. Gnoeals will often switch, however, if the player's familiar attacks it.) Sometimes, a monster attacking the player will switch to attack a monster attacking it, although this does not happen as often.

A scrap of paper, used in the quest, is near the ice stairs leading to the surface. These stairs cannot be seen on the in-game minimap, which can make it slightly confusing for inexperienced players to find their way out the dungeon. 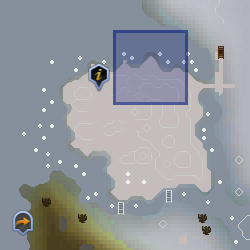 The entrance to the dungeon is not marked on either the mini-map or the world map.

There are several fast ways to get to the dungeon:

Retrieved from "https://runescape.fandom.com/wiki/Rellekka_Hunter_area_dungeon?oldid=19636953"
Community content is available under CC-BY-SA unless otherwise noted.