View source
watch 02:52
Roblox: DeepWoken - The Loop
Do you like this video?
Play Sound

The Return of Zaros series is a quest sub-series that is involved with the Mahjarrat series and the God series. This sub-series involves the steps taken to returning Zaros to Gielinor, mainly by the Mahjarrat Azzanadra, with the player's aid. The series started with The Dig Site in 2003, and ended in 2014 with Fate of the Gods.

In this quest, the player aids in discovering an ancient temple under the Digsite dedicated to the god Zaros.

In this quest, the player assists the Zarosian Mahjarrat Azzanadra escape from the Jaldraocht Pyramid in the Kharidian Desert by retrieving four diamonds containing the essence Azzanadra. Once Azzanadra is freed, he starts an attempt to return Zaros to Gielinor.

In this quest, the player assists a monk who turns out to be an Assassin hired by a follower of Zaros to steal a Zarosian artefact from the monks of Entrana. Through the player, the Assassin is able to prevent the Saradominists from replacing the remaining power of Zaros contained in the artefact with the power of Saradomin. The Assassin then delivers the artefact to the temple beneath the Digsite so the Zarosians could use it to return Zaros to Gielinor.

Main article: The Temple at Senntisten

In this quest, the player finds a mysterious archaeologist named Dr Nabanik. During the quest, Dr Nabanik reveals himself to be the Mahjarrat Azzanadra who the player freed in Desert Treasure. Azzanadra asks the player to retrieve three items to restore the Senntisten Temple and re-establish contact with Zaros. Once the player retrieves these three items, Azzanadra speaks to the god Zaros himself through the newly established communion portal. Zaros then gives Azzanadra unknown instructions.

Main article: Ritual of the Mahjarrat

While this is not directly in the series, Azzanadra is in the quest and uses beacons which contains the power of Zaros to attempt to kill Lucien.

In this quest, the player assists seven firemakers through a cave which contains firemaking knowledge. In the cave, they discover Char, a powerful fire-wielding being who was rumoured to be the former concubine of Zaros, and was imprisoned because her loyalty to him could not be turned.

In this quest, the player with archaeologist Orlando Smith discovers what is thought to be the resting place of Guthix himself. The Zarosian Mahjarrat Sliske whilst in disguise tells the player that Guthix himself is in fact still slumbering in the chambers. After conflict with several god factions who attempt to kill Guthix, the Zarosians reveal they wish to wake Guthix and persuade him to remove his Edicts so that Zaros can return to Gielinor. Instead, Sliske betrays the other Zarosians and kills Guthix with the Staff of Armadyl. Although disappointed, the Zarosian Mahjarrat including Azzanadra are pleased that the edicts are removed, paving the way for the return of Zaros.

Fate of the Gods

Main article: Fate of the Gods

The World Guardian goes through the World Gate after speaking with Azzanadra and Sliske, to heed Zaros' call. Upon entering the portal, the player arrives in Freneskae, the Mahjarrat homeworld, and after dealing with a series of obstacles, reaches the Sanctum, where they learn about Zaros' past by viewing his memories. Following that and a series of fights, the World Guardian finally meets up with Zaros himself, albeit incorporeal, standing beside the Elder Goddess Mah, and has the opportunity to ask many questions. After surviving Mah's nightmare, the adventurer uses their Divination skills to weave a new body for the god, having the choice to either help him or hinder him. Regardless, Zaros successfully returns to Gielinor as he and the World Guardian escape from Mah's wrath. Once Zaros returned, he met with his followers including Azzanadra, Nex, Char, and also Sliske. In this meeting, he excommunicated Sliske from the Zarosians, prompting Sliske to teleport away. Zaros then gave each of his followers certain tasks.

Fate of the Gods was the last quest in the series.

Zaros, as seen in the Origins of Gielinor.

Zaros being impaled by the Staff of Armadyl, as seen in the Origins of Gielinor. Note that he was really stabbed in the back, not in the chest. 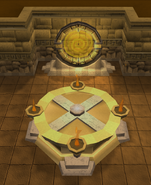 Altar of Zaros in the Senntisten Temple.
Community content is available under CC-BY-SA unless otherwise noted.
Advertisement